Weaving Women’s Voices in ASEAN (WEAVE) is a regional group of women’s organizations and advocates working at the national level in six ASEAN countries: Brunei Darussalam, Cambodia, Indonesia, Myanmar, the Philippines, and Thailand. WEAVE advocates for women’s rights issues in ASEAN across all three pillars, particularly as related to gender equality, women’s political participation, violence against women, trafficking, and access to justice, among other women’s issues including in the context of conflict situations and peace processes. WEAVE also aims to enable and facilitate meaningful and informed participation of women in the ASEAN processes and mechanisms.

WEAVE started as a small meeting of women in Yangon, Myanmar/Burma in 2014 in cognizance of the need to innovate strategies at the national level while addressing women’s issues at the regional level. The network’s first project was to influence the ASEAN Vision 2025 and its attendant documents. WEAVE conducted eight consultation workshops in SEA and gathered two online inputs from two ASEAN countries to form part of the submission. WEAVE consolidated all the inputs into a regional submission on ASEAN’s Vision 2025, which was submitted to the High Level Task Force (HLTF) in charge of drafting the Vision 2025. The network also worked at national level in advance of the 2015 Summit, to ensure that those who will negotiate on behalf of the ASEAN governments knew the agenda and issues by the CSOs.

WEAVE proactively seeks out strategic avenues to hold dialogues with ASEAN key actors to open up spaces and begin institutionalizing engagement with civil society. WEAVE, despite its youth, has experience in advocating for women’s rights issues in the ASEAN across all three pillars, particularly on women’s political participation, violence against women, trafficking, and access to justice, among other women’s issues including in the context of conflict situation and peace processes. WEAVE’s work is anchored on women’s rights groups and advocates working on the ground. Individual Member

Brunei Council on Social Welfare or Majlis Kesejahteraan Masyarakat (MKM) is a non-government organization established in 2009 to address multi-sectoral social issues in Brunei Darussalam specifically helping the vulnerable groups comprising of women, children, older persons, persons with disabilities, and the family institution. The means towards achieving this objective is through direct intervention, education & empowerment, legal advisory and guidance, awareness campaigns and research. MKM was instrumental in forming the Brunei CSO Network Committee that is tasked to convene all the CSOs in Brunei to conduct national consultations on the Brunei CSO position in the annual ACSC/APF events. Likewise, it has convened the NGOs working with vulnerable children in Brunei to conduct the Convention on the Rights of the Child (CRC) Awareness-Raising Campaigns and also convened the NGOs working with Persons with Disabilities to review the Regional Plan of Action for Persons with Disabilities in ASEAN. MKM has participated in various ASEAN research projects such as Compliance to Women’s Rights Standards: The Case of Migration of Domestic Workers from the Philippines and Indonesia in Brunei Darussalam, Baseline Study on Legal Aid in Southeast Asia and Narrative Report from Brunei Darussalam: The Evolving Role of Civil Society on ASEAN Community Building, Engagement Processes and Follow-up and Monitoring of ASEAN Civil Society Conference/ ASEAN People’s Forum (ACSC/APF) Recommendations.

The word SILAKA is formed from the word “SILA” meaning moral character, moral principles, and moral conduct, and the word “KARA” meaning an act, function, or work. SILAKA was incorporated as a non-political, non-sectarian local Cambodian NGO in January 1997 registered with the Ministry of Interior. SILAKA has the development goal to promote the implementation of democracy in Cambodian society for sustainable development which includes the economic development, including caring for the environment, and social justice. SILAKA is the secretariat of the Committee to Promote Women in Politics (CPWP) and the convener of Women NGO Caucus in Cambodia. SILAKA holds the secretariat of CPWP which involves local and international organizations and youth networks. Through these networks of organizations, SILAKA implements projects to build capacity of women leaders at the sub national level in 10 of the 25 provinces. The organization is also the convener of the Women Network for Development at the sub-national level. SILAKA was the Steering Committee of the ASEAN People Forum in 2012 and has been the contact agency to convene regional women agencies to discuss on women issues from 2012-2014. It is also the founder and core group member of the Cambodian Civil Society Working Group on ASEAN, CCWA, and working to coordinate consultation and information distribution on ASEAN. SILAKA has played a very active role in the ASEAN Civil Society Conference/ ASEAN Peoples’ Forum (ACSC/ APF) held in Cambodia in 2012. SILAKA was the head of the Steering Committee and National Organizing Committee of the Cambodia ACSC/ APF. SILAKA has been involved in many advocacy campaigns in ASEAN including in the drafting of the ASEAN Human Rights Declaration (AHRD).

Kalyanamitra is a woman NGO established in 1985 which based in Jakarta, Indonesia. Kalyanamitra was established as a critical response to the inequality and lack of gender sensitivity and awareness in the family, society and state because of the destruction of ideology and women’s movements in Indonesian during the New Order regime. Kalyanamitra focuses more on community facilitation qorking with community and women to address the causes of their marginalization; research and development, and networking. Kalyanamitra takes the lead in forming coalitions to bolster campaigns on women’s rights in Indonesia. Kalyanamitra takes the lead in convening the CEDAW Working Group Initiative (CWGI), a network composed of different women’s organizations monitorin CEDAW Compliance in Indonesia. Kalyanamitra has been doing advocacy on ASEAN human rights mechanism (AICHR and ACWC), ASEAN human rights training for NGOs in Indonesia, and some researches related with ASEAN and women issues, such as : a research entitled Compliance with Women’s Rights Standards: The Case of Migration of Domestic Workers from Indonesia and the Philippines in Brunei Darussalam.

Women’s League of Burma (WLB) was established on December 9, 1999 with the aim of increasing the participation of women in the struggle for democracy and human rights, promoting women’s participation in the national peace and reconciliation process, and enhancing the role of the women of Burma at the national and international level. WLB works in three areas, namely Peace and Reconciliation Program which includes negotiation workshops with ceasefire groups, grassroots trainings and peacebuilding workshops; Political Empowerment where political forums are organized and women’s political participation is promoted; and Women Against Violence, providing dialogues on VAW and assistance to victims of violence against women in areas inside Burma and along its borders where women experience high levels of violence and a severe lack of resources and assistance. The WLB is an umbrella organization comprising 13 women’s organizations of different ethnic, religious, and cultural backgrounds. Together with the 13 organizations, WLB has been submitting reports to CEDAW. The 2016 report covered human rights violations against women and girls in 62 townships in Chin State, Kachin State, Mon State, Karen/Kayin State, Karenni/Kayah State, Rakhaing State, Shan State, Sagaing Region, Tanintharyi Region and Yangon/Rangoon Region. WLB was one of the main players in organizing the ACSC/ APF in Myanmar in 2014. WLB was a member of the national organizing committee. WLB participates and contributes in various forums on ASEAN raising issues of women in Burma.

The Foundation for Women

The Foundation for Women (FFW) is a non-governmental organization providing services to women and based in Bangkok, Thailand. FFW was formed in 1984 and has since provided direct services to women and girl child who are victims of structural and gender-based violence, combining social service with education, research and campaign activities. FFW provides services, including information and legal assistance; advocates for the rights of trafficked women and children, and campaigns to improve the law enforcement and mechanisms for the protection and prevention of the rights of women. The FFW is involved in women’s rights advocacy in ASEAN, engaging the AICHR and ACWC. The FFW serves as Sub-committee member of the Ad Hoc Sub-Committee on Drafting ASEAN Plan of Action on Elimination of Violence Against Women, following the ASEAN Declaration on the Elimination of Violence against Women, and Elimination of Violence against Children. FFW has been coordinating the Women’s Network for the Progress and Peace (WNPP) which comprised of 56 women’s NGO and local women’s groups from all part of the country. FFW worked closely with the members of the Network for the Advancement of Women and Peace. FFW worked with members of WNPP to advocate for the Gender Equality Bill and applying CEDAW principles and framework in assess laws such as Domestic violence Law and Human trafficking Law.

The Women’s Legal and Human Rights Bureau (WLB) is a feminist legal NGO pursuing women’s human rights advocacy in various national and international platforms. WLB has a program on Human Rights and Policy Advocacy which targets human rights mechanisms like Convention on the Elimination of all forms of Discrimination Against Women (CEDAW), the Universal Periodic Review (UPR), and those associated with the ASEAN. WLB’s work with the AICHR, ACWC, ACMW and other ASEAN sectoral bodies and the Philippine government has succeeded in providing avenues for women and women’s human rights organizations from the Philippines to incorporate women’s human rights principles and standards in the ASEAN processes, policies, outputs and mechanisms. By working with other women’s groups, a national network called Philwomen on ASEAN made up of more than eighty (80) women’s rights advocates and groups across the Philippines, was established. These women are working on various issues and representing different sectors from rural and urban poor women, women workers, migrants, lesbians, bisexual and transgender women (LBT), women with disabilities, women in education, young women, among others. Philwomen on ASEAN was clear that the ASEAN is a strategic terrain for women’s advocacy.

Yuyun Wahyuningrum is currently the Team Leader of Regional EU-ASEAN Dialogue Instrument Human Rights Facility (READI HRF), a two-year dialogue facility initiative of the EU to support ASEAN regional integration agenda on the area of human rights. As the Team Leader, she worked closely with the ASEAN Intergovernmental Commission on Human Rights (AICHR), the ASEAN Commission on the Promotion and the Protection of the Rights of Women and Children (ACWC), the ASEAN Committee on Migrant Workers (ACMW) and the ASEAN Committee on Women (ACW) as well as the ASEAN Secretariat on various issues, i.e. trafficking in persons, legal aid, gender equality, climate change, independence of judiciary, right to life, child protection system, the role of media, migration, and business and human rights. She also engaged with the ASEAN Senior Official Meeting on Transnational Organized Crimes (SOMTC), Senior Official Meeting of Social Welfare and Development (SOMSWD) and the ASEAN Secretariat. She is one of the founding members of WEAVE. Togther with others,she also established the Southeast Asian Initiatives for Human Rights Governance and Accountability (SIHRA) in 2015. She moderates a list-serve called ASEANCats@googlegroups.com, with more than 2,000 member accounts from all over the world. Her writings appear in The Jakarta Post, NewsDesk Asia, Bangkok Post and The Nation. 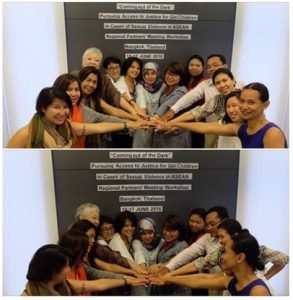