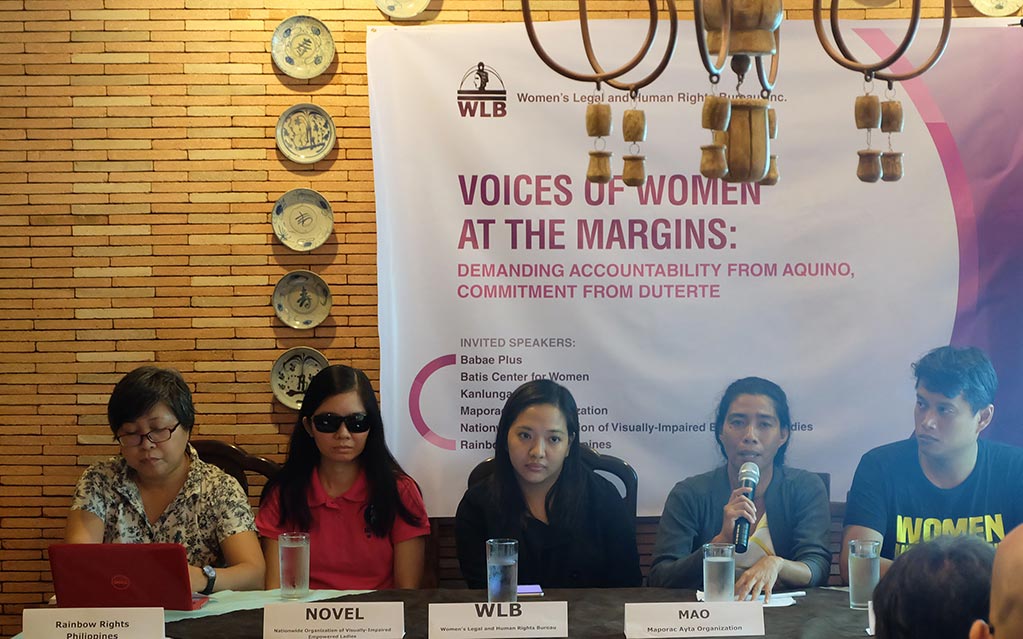 The Women’s Legal and Human Rights Bureau, Inc. (WLB), together with members of the Convention on the Elimination of All Forms of Discrimination Against Women (CEDAW) Working Group Philippines, challenges the new administration to perform better than the Aquino administration in terms of promoting and protecting women’s human rights.

On July 5, the WLB and other women organizations in the Philippines reported to the CEDAW Committee in Geneva, Switzerland to call attention to the gross neglect of duty of the Aquino administration in complying with the CEDAW and ensuring the full enjoyment of human rights of women.

The 2016 Philippine CEDAW Shadow Report exposed the increasing number of cases of violence against women (VAW) and discrimination experienced by women in the marginalized sectors: women with disability, women living with HIV/AIDS, migrant women and domestic workers, indigenous women, women victim-survivors of disasters, and lesbian, bisexual and transgender (LBT) women.

In 2015, the Philippines ranked 7th in the Global Gender Gap Index worldwide and the highest in the Asia Pacific region; this seems to indicate that the previous administration did well in promoting women’s human rights. However, this “good” standing of the Philippines does not represent the lived realities of women on the ground. While not discounting the improvements, many women − especially in the marginalized sectors − continue to struggle in claiming their rights and accessing justice and social services.

One of the highlights of the report is the apparent disregard of women’s needs during and after the onslaught of Typhoon Yolanda. In fact, of the P93.88 billion total budget released for Yolanda-related programs and projects, only one project which is specific to the needs of women was implemented. The Maternal and Child Health and Nutrition project, which received only about P27.39 million from 2013 to 2015, was the only project crafted specifically for Yolanda women survivors by the Department of Health. The rest of the projects implemented for the recovery and rehabilitation of Yolanda survivors are not gender-specific, and thus fails to address the gender-differentiated needs of women in the affected communities.

“Pervasiveness of various forms of violence is also a scourge that many women and girls continue to endure in disaster contexts. However, these cases are often overlooked by authorities and left unreported by victim-survivors because of the lack of mechanisms to document incidence of VAW.  For instance, trafficking and prostitution persist during conflicts and disasters, as women and girls are more vulnerable to exploitation given the scarcity of livelihood and employment opportunities and the exacerbation of poverty,” said Edz Dela Cruz, Program Officer of WLB.

Notwithstanding the multiple burden that disasters bring them, women remain invisible in government records, as well as in the planning and implementation of programs and projects. In the State report presented by the Philippine government before the CEDAW committee, Typhoon Yolanda was mentioned in only one sentence, clearly disregarding the impacts of disasters on women. Despite the overwhelming impacts of disasters on women, particularly in the marginalized sectors, they continue their struggle to find ways to meaningfully participate in politics and governance.

The Philippines is a signatory to many international conventions and treaties. One of which is the Convention to the Elimination of All Forms of Discrimination Against Women (CEDAW), which was signed by the Philippines in 1980 and ratified in 1981.

During his inaugural speech, President Rodrigo Duterte declared that treaties and international obligations will be honored under his administration. Duterte’s intention to commit to international agreements such as CEDAW is a welcome move for women organizations.

“A president who will commit to fulfill his promise of transformative change and substantive equality is what every woman in the marginalized sectors need right now. We hope President Duterte will do better than the previous administration,” Dela Cruz added.

In the oral statement presented by the WLB before the CEDAW Committee in Geneva, several points related to women in the context of disasters were raised, which women hope the Duterte administration will soon address. Among these points were the dominance of male-oriented strategies of disaster response and rehabilitation, which resulted in subordination of women and invisibility of their contributions; lack of comprehensive and updated sex- and social-disaggregated data; denial of services and access to justice for victims of harassment and sexual assault in evacuation centers; increase of sex and labor trafficking; and non-prioritization of women’s sexual and reproductive health needs.

Maureen C. Pagaduan, WLB’s Board of Trustee said during the reporting to the CEDAW Committee, “In summary, the years also point to the truth of the existence of impunity and that serious and persevering work remain for substantive equality and the fulfillment of political and ESCR of generations of women.”

The CWG is composed of women organizations that represent women in the marginalized sectors: women with disability, women living with HIV/AIDS, migrant women and domestic workers, indigenous women, women victim-survivors of disasters, and lesbian, bisexual and transgender (LBT) women. These groups include Women’s Legal and Human Rights Bureau, Inc. (WLB), Babae Plus, Mindanao Migrants Center for Empowering Actions, Rainbow Rights Philippines, and Philippine Coalition on the UN Convention on the Rights of Persons with Disabilities. Other members of Philwomen on ASEAN such as Batis Center for Women, Kanlungan Foundation, Maporac Aeta Organization, and Nationwide Organization of Visually-Impaired Empowered Ladies (NOVEL) Philippines, also contributed to the report.